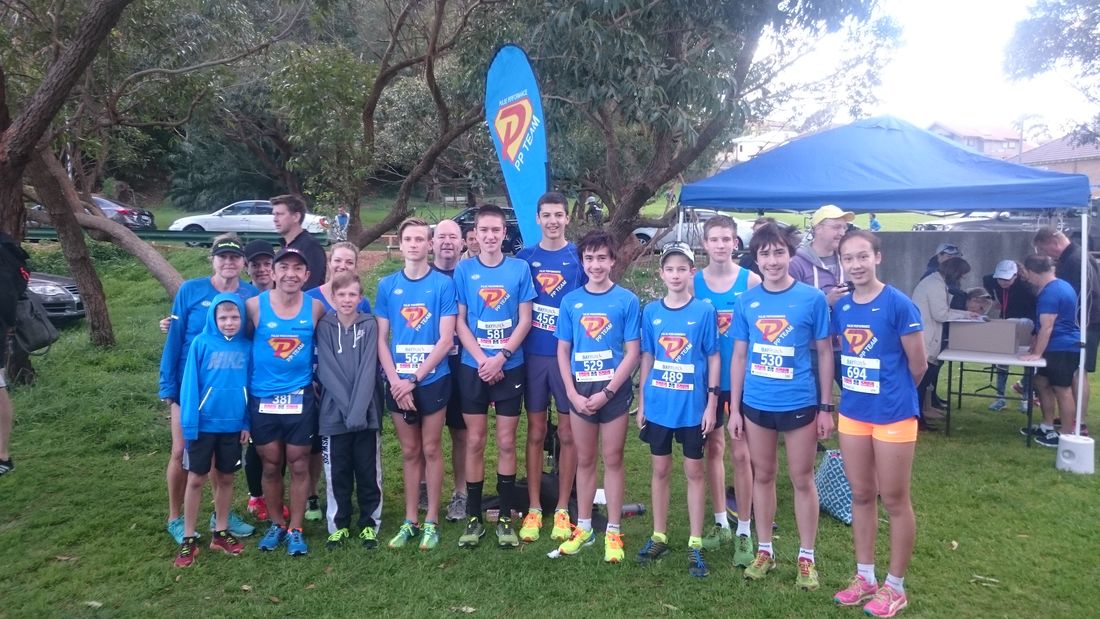 Trevor flies the Pulse flag in Washington DC and New York... in the same week.

There's something truly awesome about taking part in an event overseas. So on a recent trip to the United States, Trevor busted out his Pulse colours for two half marathons - just five days apart! Both races - the first in Washington DC and the second in New York City - were held in near freezing conditions, but that didn't stop Trevor from proudly wearing his Pulse singlet (with a thermal long-sleeve underneath). And to top it off, he achieved a new PB, breaking 90 minutes in The Big Apple. Well done Trevor!

A huge congratulations to two of our superstar young triathletes, Luke and Jayden, who represented Pulse at the NSW Club Championships in Orange. Having celebrated their 18th birthday just last month, they went up against much older competitors in the Under 30s category but still finished in fourth and fifth place.

Simon... you are an Ironman!

The longest and most gruelling triathlon there is, Ironman is not for the faint of heart. With just two triathlons under his belt, Pulsie Simon signed up to take part in Ironman New Zealand, held in picturesque Lake Taupo on the North Island.

With his wife and little girl on the sidelines to cheer him on, Simon crossed the finish line in the more than respectable time of 12:28 - finishing strong with an awesome 3:38 marathon. Well done Simon!

Pulsie athletes Victor and Stew formed two-thirds of the Happy Wheels team that took out first place for the third consecutive year! Stew's powerful bike gave Victor a nine minute lead on the run, which he put to very good use, smashing the field who were left fighting for second place. Leone, Gillian and Sarah came together again as the red-lippy-wearing female Pulse team "LeGS", proving that you can race hard and still look great doing it! It was Sarah's first race back since becoming a Mum four months ago. Sam lined up for his first tri in two years while Leah posted a new PB of 1:32:34 and 200m track sprinter, Pulse Junior Anson conquered his first ever triathlon and placed 4th in his category.

Yousef was 12th across the finish line in the 10km race in a time of 42:05. Not his best time at Husky, it was a good hit out to test his current fitness after some time off. Coach Dani came 3rd in the 5km in 17:33, showing he still has a lot of work to do to return to peak fitness after relaxing taking a little too long to recover from The Great Australian Alpine Ascent two weeks before. Naomi was happy to cross the finish line of the 5km after Coach Dani talked into it at the last minute!

It has been designed to be one of the single most gruelling one-day triathlon events, mainly due to the elevation of both the bike and run legs.

Coach Dani knew he was alive (then thought he wouldn't be for much longer!) after completing the 3km ocean swim (930m above sea level) and the first 90km of the 124km ride, which climbs up to 3200m elevation, which is roughly one-third the height of Mount Everest! Riders go to the famous Dead Horse Gap, ‘The Gate’ into the Murray River Valley and Charlotte Pass - all famous for their gruelling climbs.

Part of The Great Australian Alpine Ascent Festival, the Tri Kozzie is a shorter but still remarkably tough triathlon at Mount Kosciuszko. Pete was a trail runner when he joined Pulse but with some encouragement from Coach Dani, decided to give multi-sport a crack. After completing his very first traithlon last December (a Sprint Distance at Kurnell) he signed up for the Tri Kozzie - 1.5km swim, 50km ride (1800m elevation) and 9km run. Coming out of the water in 12th spot, he quickly made up ground on the ride, entering T2 in fifth position. Finishing strong with the 9km of-road run, Pete finished the race in fourth place overall and first in his category.